While we released TheHive as a free, open source product in November 2016, it must not be chalked off quickly as a young, immature solution.

v1.0.0 was put into production in our environment in October 2014. Yes, October 2014. And we’ve been using it every day and refining it since then. Once we deemed it good enough, we decided to share it with the community under an AGPL license to help incident responders in their mission.

A few months after the first public release (v 2.9.0), we adopted bee-related codenames for new major versions and published Buckfast (v 2.10.0).Cortex, the analysis engine that allowed TheHive to analyze and assess observables at scale was shipped as a separate product.  Buckfast can interface with one or several Cortex instances depending on your performance and OPSEC needs. For example, you may want to install a separate Cortex on your investigation, air-gapped network to interact with your sandbox as you don’t want to be firing those malicious samples on your corporate network.

Buckfast can also create cases out of MISP events. You can configure it to import them from a single or many MISP instances. And to prepare for the next major version, Mellifera, due in early May 2017, we have released TheHive4py, a Python API client for TheHive.

TheHive4py will be improved to fully support Mellifera’s alerting framework. To put it simply, Mellifera will not only let you preview MISP events and import them but also receive SIEM alerts, email incident reports and different other types of alerts depending on your environment thanks to TheHive4py. And if an analyst discards an alert by mistake in Mellifera’s notification area, they can go back to a ‘trash bin’ and fix their error.  Mellifera will also allow you to export cases as MISP events to share IOCs with other teams.

Now lets’ get back to TheHive’s perfect companion: Cortex. As of this writing, Cortex features 13 analyzers. These analyzers can perform one type of analysis (such as Abuse Finder) or several (such as DomainTools which can do 6). In the very near future, we plan to add at least 10 more analyzers which are shown in the boxes with dotted borders in the picture above. All upcoming analyzers are contributed by our user community whom we wholeheartedly thank. One of the analyzers will allow you to check observables from TheHive against a MISP instance to search for events that may contain them.

We have also begun work on a Python API client for Cortex dubbed… Cortex4py (how creative wink wink). This will allow people who are not using TheHive to summon the power of Cortex from their SIRP, scripts or any other DFIR tool that can import or interact with Python code.

So in the few months since our project was born to the Internet, we have released a solid collaborative SIRP, a simple yet powerful analysis engine to analyze observables and aid teams in their investigations as well as a Python API client for our SIRP. We also have rather ambitious plans to make them even much more useful.

Oh and one more thing! We have released another piece of software around the same time as the first version of TheHive and on which we haven’t said much so far: Hippocampe. Hippocampe can regularly download feeds and exposes a REST API to let you query them from Cortex (or from other tools). You submit an observable and it’ll tell you if it appears in one or several feeds along with a score. The score takes into account the trust you put in the feed sources (which can be adjusted over time) and the number of sources which contain the observable. We’ll cover Hippocampe in more details in an upcoming post.

When you use TheHive, running an analyzer on an observable through Cortex will generate a long report and, in most cases, a short report as well.

Let’s see how this works in practice through an example. Assume we are trying to assess whether the 636a4249104acaaf6d76d7409dc3cb2d MD5 hash is malicious or not:

We start by clicking on it, which will open a new tab: 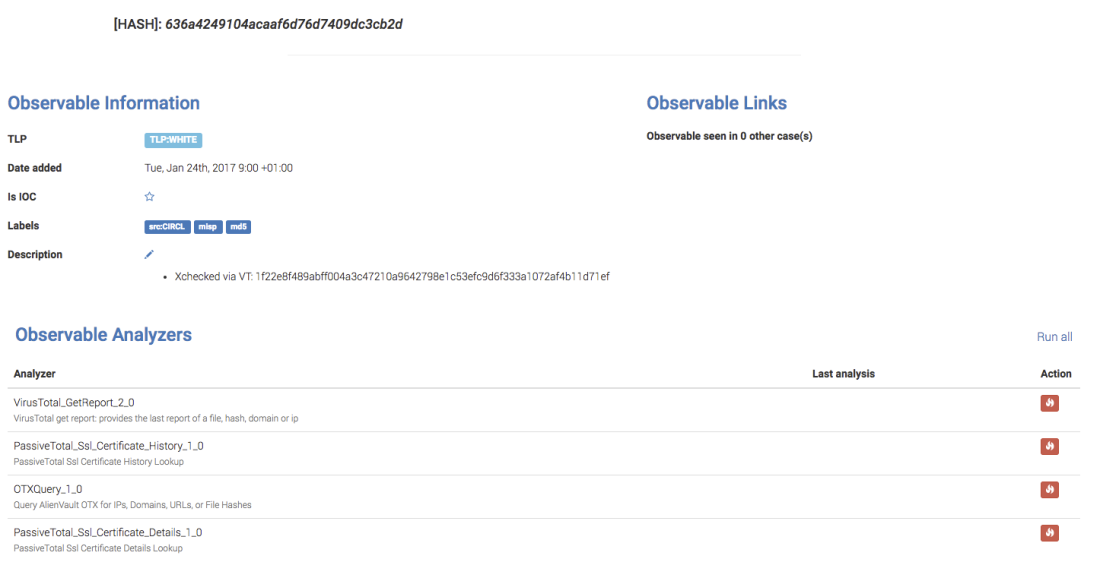 This TLP:WHITE hash was imported from a MISP event published by our good friends at CIRCL.lu sometimes ago. As you can see from the screenshot above, no analyzer was executed on it.  Let’s check if it is known to VirusTotal (VT). To do so, we just need to click on the fire icon located at the right side of the VirusTotal_GetReport_2_0 row.

A blink of an eye later, the job has finished successfully as we can tell from the green checkmark. Clicking on the date will let us see the long report, presented according to a report template that we freely provide with most analyzers to the exception of PassiveTotal (but in a few days, PT will also get its own nifty templates). 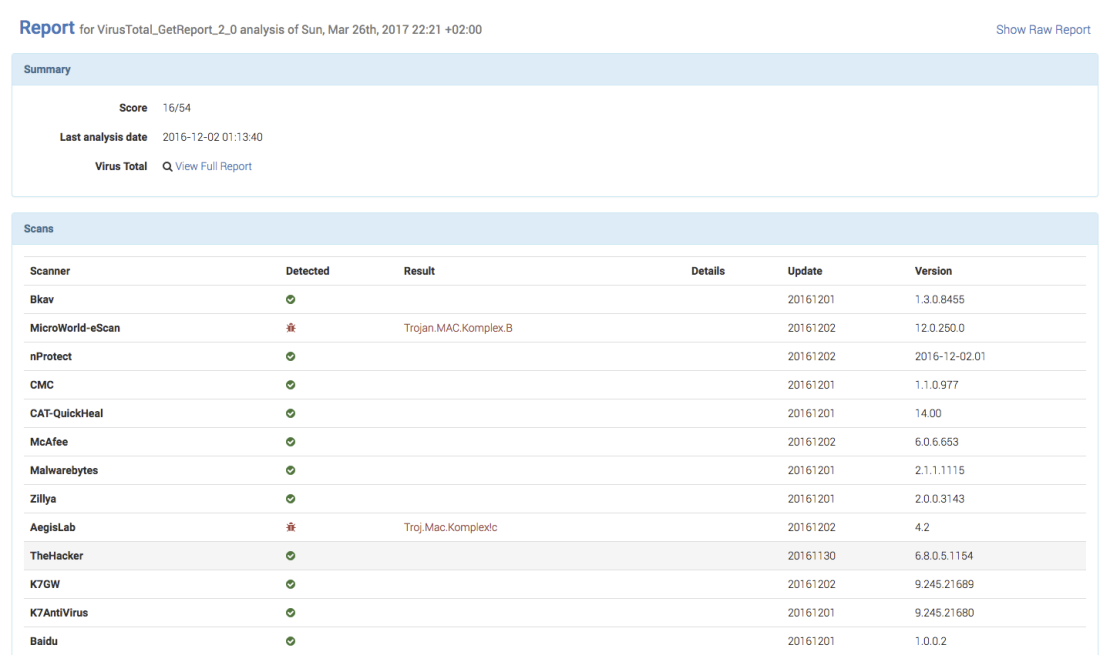 Since we are checking whether VT knows a hash or not, it will give us the results if any corresponding to the last time the associated file was scanned on the service. In our case, this dates back to Dec 2, 2016.

When the analyzer was executed, it also produced a short report which TheHive displays below the observable:

Short reports come in 4 colors. Red means danger (what else?). Orange means suspicious. Green means innocuous. And blue is informational. OK but what does this have to do with the title of this post?

A few days ago, while working on a new set of analyzers, Nils Kuhnert reported an issue in Buckfast 1 (2.10.1) pertaining to short reports on observables. When he ran some analyzers that should have produced short reports, he didn’t get any. When he reverted to Buckfast 0 (2.10.0), it worked. We tracked down the problem and found that our build process was the culprit. The all-in-one  binary package which was supposed to contain Buckfast 1 and Cortex was in fact a 2.10.0 TheHive snapshot that had a regression. We have uploaded a fresh all-in-one binary package with Buckfast 1 instead of the development snapshot.

If you have grabbed the binary all-in-one package, please download it again and update your instance. If you are using a docker version or built Buckfast 1 from sources, you are fine. To make sure you are running the right version, click on your username once you are logged in then on About TheHive. You should see the following information:

We are going to review our release process from the ground up to ascertain such errors never occur again. We expect it to be ready for Mellifera, our next major release of TheHive. Please note that starting from that release, we will no longer provide all-in-one binary and docker packages. Instead, we’ll have separate packages for TheHive and Cortex. TheHive4py and the upcoming Cortex4py will be made available through PIP.